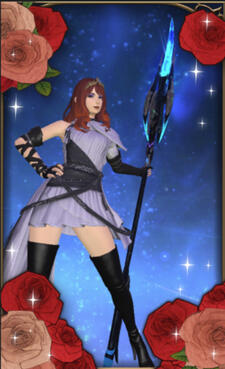 "With this armor, I shall defend the weak.
With this spear, I shall smite the enemies of Halone.
With my life, do I serve for Ishgard."

Before the Fury's Gaze

In the beginning of her adventures she knew not of her past, having only woken up in Gridania with a passion for adventure. Deciding that by adventuring, she would seek answers to who she was. She only knew the Fury to be her patron, as after visiting the Chapel she found her heart to be at ease when looking upon Her Mark, and thus she would strike foes in her name. Along her journey in Eorzea, she made many friends, and even more enemies, but yet the thing that plagued her heart was but one question: where did she come from? Fast forward to the events of Heavensward and her answers would be found with more questions.

As soon as she was given residence in Camp Dragonhead by her adopted brother Haurchefant she took up training as a Dragoon, as when he made mention of it, her heart leaped in joy, yet she knew not why. It didn't take too long for word to spread of an "outsider" training to become an Ishgardian Dragoon, and as her training furthered she would be granted residency within Ishgard, where her mind began to cloud with memories she could not recall prior.

As her work proceeded within the walls, revelations came to light finally about who she was, revealing her to be the last line of the House Vouivre, her father a Knight and mother a Dragoon whom both disappeared. Thus did it explain why she had felt that being a Dragoon was her calling, yet the war with dragons did not sit well with her soul.

In this case, the rumors of the "Outsider" Dragoon were put to rest as her House was thankfully not completely lost thanks to the work of the Delacrovia family. A family that has long served the Vouivre House for as long as Ishgard perhaps itself, the Head Butler Alesouix has long kept the name a somewhat steady staple until the Heir returned home at last. As soon as Keira settled into her new home, she would put her nose to the grindstone in order to use her newfound influence and wealth to help aid the poor and the sick of Ishgard. This, of course, caused turmoil with the upper class, as they didn't think the nobles should bother themselves with "trivial" matters, yet Keira would turn away from the posh lifestyle to help her fellow neighbor.

Into the Dragonsong War, she would serve Ishgard as a proper Dragoon, however each Dragon slain meant more grief in her heart, a grief she knew not why existed. Despite it, she pressed on and once the War ended, she would soon come face to face with individuals who would give her the answers she knew not she needed.

Howdy! I'm glad you took the time to read my carrd! I put a lot of effort into it so I hope you like it!

Essentially, if you're interested in roleplaying with my character, just hit me up! I would love to roleplay with you! Here's some stuff you oughta know:

.~. Romance is more than acceptable! I'm a cheesy romantic, so feel free to try and play anything from white knights to rougish characters. Swoon me, I will eat it up. I am open to multiple storylines so there is no limitations to what our characters can do together. This means that I can have my character be in different relationships and it not break someone's story. If you are not a fan of this, then I am sorry. I do not like locking my character to one person in every situation ever.

I am a female that prefers males, so I apologize to any ladies.

This also means you need to be an ADULT to do this kind of storyline with me. I do mature themes and I push lines. If you are below the age of consent, then don't expect this storyline. Ever.

.~. I am not someone who expects a novella every response. I am pretty relaxed and can work with one-liners SO LONG AS they are decent enough to where I can work off of them. Beyond this, I am not picky.

.~. I am willing to meet and travel to make interesting scenarios, so don't feel as though you're forever locked to Ishgard because of my character. Yes, she is a Dragoon. Yes, she is a noblewoman. No, she isn't ball and chained to Ishgard alone. I am happy to accomodate.

.~. Discord: Y'karia Rhiki #0945 - Easiest and Fastest way to get a hold of me. My statuses can inform you of what I'm doing (or not doing) at any given time.

.~. Tumblr: https://thenobledragoon.tumblr.com/
Brand new, but willing to RP here if need be. Not reliable as of yet.